Hydroponic history in the making 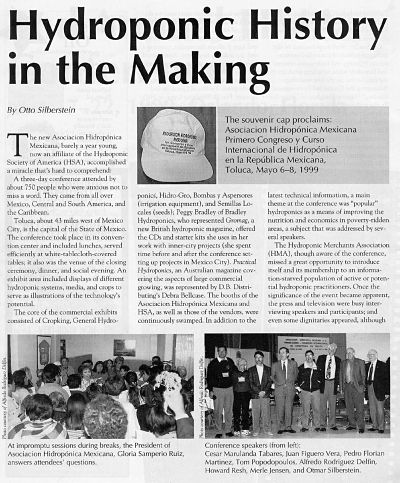 The new Asociación Hidropónica Mexicana, barely a year young, now an affiliate of the Hydroponic Society of America (HSA), accomplished a miracle that's hard to comprehend.

A three-day conference attended by about 750 people who were anxious not to miss a word. They came from all over Mexico, Central and South America, and the Caribbean.

Toluca, about 43 miles west of Mexico City, is the capital of the State of Mexico. The conference took place in its convention center and included lunches, served efficiently at white-tablecloth-covered tables: it also was the venue of the closing ceremony, dinner and social evening. An exhibit area include displays of different hydroponic systems, media and crops to serve as illustrations of the technology's potential.

The core of the commercial exhibits consisted of Cropking, General Hydroponics, Hidro-Gro, Bombas y Aspersores (irrigation equipment) and Semillas Locales (seeds); Peggy Bradley of Bradley Hydroponics, who represented Gromag, a new British hydroponics magazine, offered the CD's and starter kits she uses in her work with inner city projects (she spent time before and after the conference setting up projects in Mexico City). Practical Hydroponics, an Australian magazine covering the aspects of large commercial growing, was represented D. B. Distributing´s Debra Bellcase. The booths of the Asociación Hidropónica Mexicana and HSA, as well as those of the vendors, were continuously swamped. In addition to the latest technical information, a main theme at the conference was "popular" hydroponics as a means of improving the nutrition and economics in poverty-ridden areas, a subject that was addressed by several speakers.

The Hydroponic Merchants Association (HMA), though aware of the conference, missed a great opportunity to introduce itself and its membership to an information-starved population of active or potential hydroponic practitioners. Once of the significance of the event become apparent, the press and the television were busy interviewing speakers and participants; and even some dignitaries appeared, although the association had no support from governmental, civic agencies or industry.

The conference was a great success by every criterion. Although circumstances didn't allow for the publication of proceedings, participants could order reprints of individuals talks at a moderate cost.

Full credit for establishing the Asociación Hidropónica Mexicana and for planning and organizing this conference, its execution and its ultimate success must go to Gloria Samperio Ruiz, the president of the Asociación and her staff. She has attended many conferences during the past few years. But, most importantly, last year, she traveled all over Mexico to acquaint people with hydroponics creating a ground swell of interest.

To say that she is a tireless worker is a platitude; she's a dynamo who lives on two or three hours of sleep per day. She seems to be driven by patriotic fervor. As she says, "I want to help the people of my country".

The Asociación Hidropónica Mexicana is now faced with the challenges of maintaining its momentum and meeting the needs of its membership. Our best wishes are with them.

Publish modules to the "offcanvas" position.